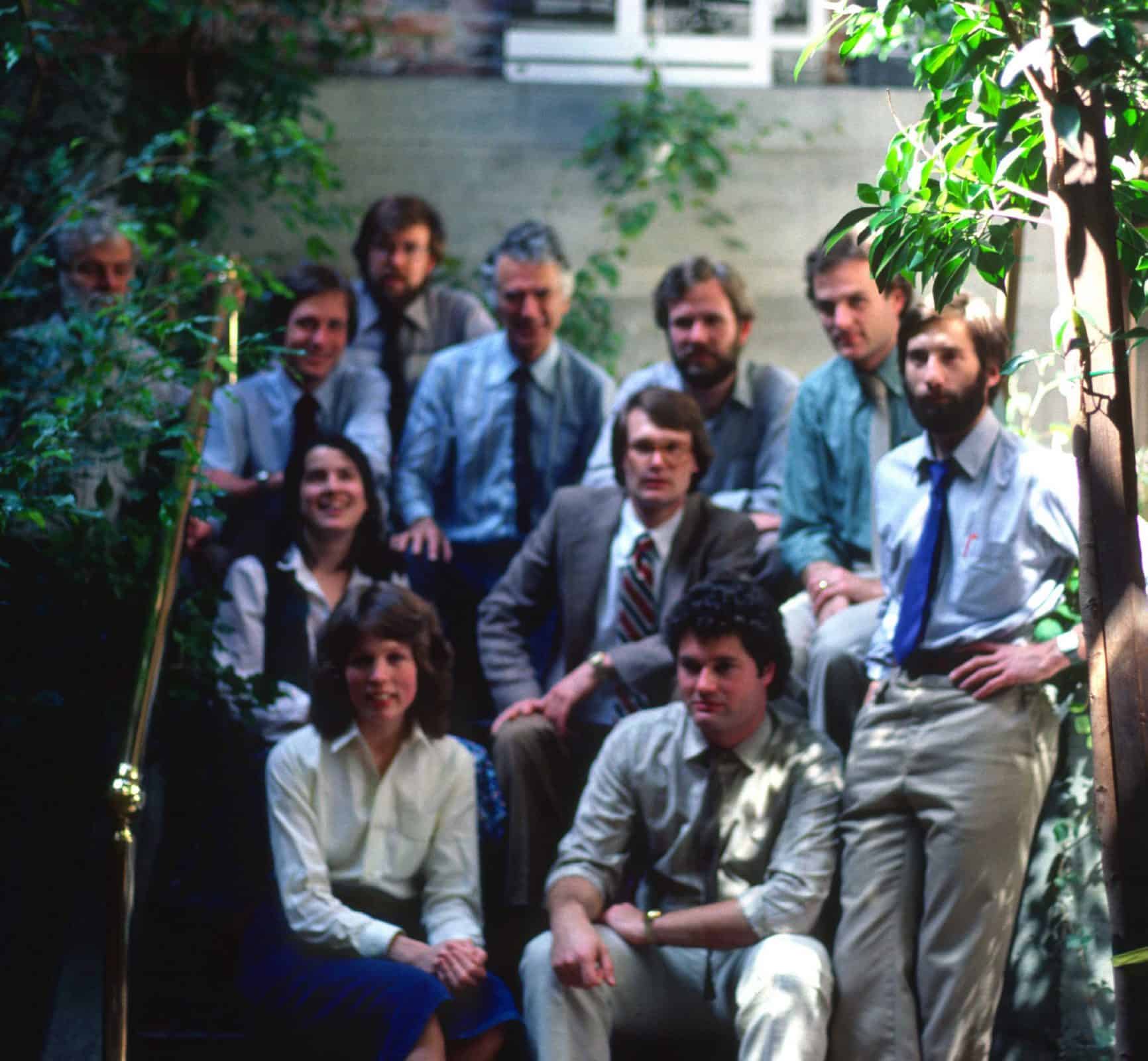 The design team was led by Fred Bassetti & Company, Architects.  We were awarded this project after Fred Bassetti met William Slayton, director of FBO, at an AIA event in Washington, D.C. in 1978, and asked for the firm to be considered for FBO projects.  Following interviews and an FBO visit to the office in Seattle, we were selected from a list of recognized architectural firms.

The Firm
The firm was relatively small- two partners, two principals, two associates, and about 15 architects, plus support staff.   By today's standards, it was old-fashioned, non-hierarchical, and informal.  New employees were often shown tools and lumber and told to build their own drafting tables.  Senior architects worked as generalists and usually followed projects from start to finish, working on all levels of design and all phases through construction.  The embassy was so important to the firm that a partner, a principal, and an associate were involved throughout the project.

The firm was chosen because of its reputation and history of successful projects in the Pacific Northwest, and a design philosophy that was deemed appropriate for the project.  The design philosophy was based on several principles:

In simple terms, our challenge was to synthesize FBO's functional requirements, it's Architectural Policy, the rich cultural and architectural heritage of Portugal, the natural and historic features of the site, and our firm’s design philosophy and style.  It was a challenge for architects from the dark, damp Northwest to create a fitting design for the warm, sunny, ancient, Moorish-influenced location in Portugal.

At that time, it was unusual for most firms, at least in our experience, to design projects outside their local region, much less overseas.  Our initial visit to Lisbon was only my second trip to Europe, the first being only a few years earlier.  When the project began, Metler and I were about 30 years old and, aside from Bassetti, most of the rest of the architectural team was even younger.  It was bittersweet to realize that at that age we might be working on the most remarkable project of our careers, and to this day the project is on the resume of everyone who had even a small role in the design.

Fred Bassetti, Partner-in-Charge
Bassetti was the founder and philosophical leader of the firm and was responsible for building the “brand”: its design philosophy and reputation.  He attracted good designers and fostered the environment in which we created the project.  He was a critic, a mentor, an advisor, and client liaison, particularly in the critical early phases of design.  He publicly and eloquently championed the design, and provided inspiration to the team.

In his 60s during the project, he was in the prime of his career.  He was active in Seattle civic affairs and a leader in the movement to save the Pike Place Market.  His energy and enthusiasm were inspiring.   He was articulate and had a wide range of interests, but was also a bit eccentric and  sometimes impulsive and easily distracted.  During the Concept Design phase, Bassetti and Rich Haag, the landscape architect, took several driving trips around Portugal, and Haag told us that whenever they went to the rental car company, the people cried “No, not Bassetti” because their cars usually came back in impaired condition.  Bassetti was injured skiing in the winter of 1979, and when we went to see him in the hospital his first comment was that it would have killed a younger man.

Like many noted Pacific Northwest mid-century architects, his career started with residential projects, and his design philosophy and many of his trademark design features - sloped roofs, extensive use of wood and custom brickwork, and the chamfering of virtually everything - sprang from these intimate, residential projects.  As his practice grew into larger, commercial work, these original design elements were adapted to larger buildings with mostly successful results.

As with many partners, Bassetti’s most direct contribution to this project was getting the job and acting as a critic and advisor.  His time was spread across many projects and outside activities, and he couldn’t spend much time on even an important project like the embassy.  Because his involvement was at a high level, he would often drop in unexpectedly and want to make changes which conflicted with the program, engineering requirements, codes, or the client’s instructions.  Managing Bassetti was a key responsibility for several of us.

Richard Metler, Principal
Metler was a renaissance architect- an excellent designer, artist, and craftsman who worked equally well with aesthetic design concepts and complex engineering systems.  He was responsible for much of the building’s character.  As Project Manager he also managed fees, contracts, etc.

Christopher Kirk, Associate
I was co-designer with Metler of the overall project, from the first site visit through construction, and I traveled to Lisbon for final documentation of the completed project.   I was also responsible for interior design and furnishings selection with FBO.

Together Metler and I developed the site plan, floor plans and sections, building massing and elevations, and structural and MEP systems, and, as the design continued through later phases, managed the work of staff and consultants to develop details which integrated everything into a cohesive design.

James Mueller, Architect
Mueller was drafted as project architect for the existing buildings because of his historic preservation experience, and he managed design of the renovations of the 17th Century manor house and chapel.

Other Architects
A group of other talented architects helped design the project at all levels.  Architects Dick Petersen, Mike Hoffman, and Jeff Thompson designed and detailed many important elements of the building's interior and exterior.  Larry Parrett, Hope Dunlap, Kristina Stimson, Julie Regnier, and Craig Webster were intern architects that worked on many specific parts of the project.